This topic has been archived. This means that you cannot reply to this topic.

No replies to this topic 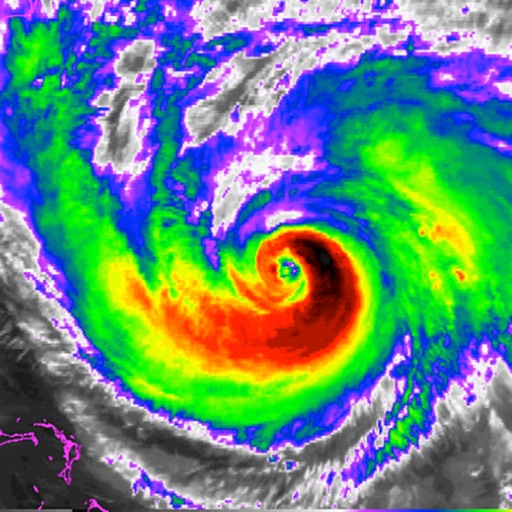 By far the fastest, most convenient way to access National Hurricane Center data. The app displays detailed satellite imagery animations, allowing you to track the storm using the most recent observations.

-- Band 2 --
0.64 µm - 'Red' Band - 0.5 km resolution - Visible band 2 is in the red portion of the spectrum and has the highest resolution of any ABI band at 0.5 km, and for that reason is the primary visible band. It is used primarily to monitor the evolution of clouds throughout the daylight hours.

-- Band 4 --
1.37 µm - 'Cirrus' Band - 2 km resolution - Band 4 will detect very thin cirrus clouds during the day. This band is centered in a strong water vapor absorption spectral region. It does not routinely sense the lower troposphere, where there is substantial water vapor, and thus provides excellent daytime sensitivity to high, very thin cirrus under most circumstances.

-- Band 5 --
1.6 µm - 'Snow/Ice' Band - 1 km resolution - During the day band 5 can be used to differentiate ice clouds and snow (relatively dark) from liquid water clouds (relatively bright), such as fog and stratus.

-- Band 13 --
10.3 µm - 'Clean' Longwave IR Window Band - Band 13 at 10.3 µm is an infrared window, meaning it is not strongly affected by atmospheric water vapor. This channel is useful for detecting clouds all times of day and night and is particularly useful in retrievals of cloud top height.

-- GEOCOLOR Band --
Geocolor is a multispectral product composed of True Color during the daytime, and an Infrared product that uses bands 7 and 13 at night. During the day, the imagery looks approximately as it would appear when viewed with human eyes from space. At night, the blue colors represent liquid water clouds such as fog and stratus, while gray to white indicate higher ice clouds, and the city lights come from a static database.

Back to Crack Releases